Most of the stallions I’ve had anything to do with was while I was massaging one or walking them after a race. I worked at a Quarter Horse breeding farm and often was in the breeding shed with the resident stallion. I’ve ridden a stallion on one or two occasions.

When I was a child and a teenager, stallions were considered monsters. The horror stories were legion. Somehow, it was always a man telling me this, and somehow, it always came around to sexuality. Stallions, I was assured, would attack a woman who was menstruating at the time. They would kill foals (they will, if the foal isn’t theirs. Yes, they know.). They were to be kept locked up behind bars and never, ever trusted. And, of course, you couldn’t treat a stallion as if he were a horse. Oh, no. Only circus lions were treated more harshly, and as if they were as dangerous.

Even then, I had a high level of skepticism…why would a horse want to attack a menstruating human? Horses don’t menstruate, and stallions don’t think of humans as mates. Friends, partners, lovers, (and those of you who love horses know what I mean by that), but certainly not as sex partners.

(Oh, yes, I hear you. I know most geldings are flashers. Raven is. You give him a good scratching, he puts out Mr. Happy to tell you how appreciative he is. I tell him it’s beautiful, I’m very impressed, now put it away. )

When I’d reached the age of menarche, handling hot Thoroughbred colts while I was menstruating never seemed to cause a problem. The fact that they were high-strung, highly athletic, turbo charged colts was the problem…but that’s what colts do. Act up. They’re COLTS.

My physical condition had nothing to do with it.

Every stallion I’ve ever met was nothing like a monster. Most, in fact, were perfect gentlemen. Only one, a Morgan,  had ‘issues’ and I firmly believe he was ‘dangerous’ because he was kept locked up in a small, dark stall. You ask any Corrections officer what humans do when they’re locked up in solitary confinement and they’ll tell you “they go mad”.  So do horses, no matter their sex.

Let’s not, though, make the mistake of thinking of a stallion as a fertile gelding. Oh, no. They know very well that they are entire, and what their purpose in life is. The saying I’ve heard is:

One orders a gelding,

and negotiates with a mare.

Even after gelding, most horses know that they are males and what their purpose in life is.  Mr. Mule, who lives down the road from me, has two geldings, a mare, two male mules and a female mule. One of his geldings is forever pestering the females..mule or mare, he doesn’t care, when they’re in heat, he’s continually mounting them. Although I think he’s given up on the mare. She was added to the band just last year, but has already assumed the position of Alpha Mare. When he just couldn’t perform after going through all the actions, she finally had enough and kicked him to the curb. The long suffering mule, though, seems to endure Romeo’s ardent-yet fruitless-attempts with typical mule forbearance.

But I was in no hurry to go anywhere, so I allowed him to plod along, never worrying that it may appear as if I’ve ridden the horse to the point where he’s about to drop dead.

Suddenly, Jordan was piaffing. His neck arched like a bow, his eyes bugged out, ears pricked forward, prancing, lashing his sides with his long and cocked Arab tail. He nickered deep, deep in his chest,  all for the sake of those beauties before him.  The riders stopped in terror. “Is that a stallion?” one quavered. I laughed, and said, “Only in his dreams, ma’am, only in his dreams.” They edged past me gingerly. The mares thought Jordan a fine specimen, but no, horses, we’re not here on a date.

Once the mares had passed, my fiery ‘stallion’ suddenly returned to the poor, old horse, poor old horse routine.

Bullshit, I said, I know better, and put him into his lovely slow canter which we held all the way home.

Still, stallions have a certain aura about them. They are self aware and highly intelligent. And they…well, they have this brio, a masculine attitude that is unmistakeable.

At the recent 2nd level dressage show I worked at, a young man showed up with a Friesian stallion named, (appropriately), Hollywood.
Hollywood isn’t your typical Friesian. He’s small, no more than 15 hands. “They” had trimmed his mane and feathers. The young man rode him at, I believe, 2nd level. This little stallion was so very well behaved outside the ring, but inside, he was A Stallion Despite My Height. 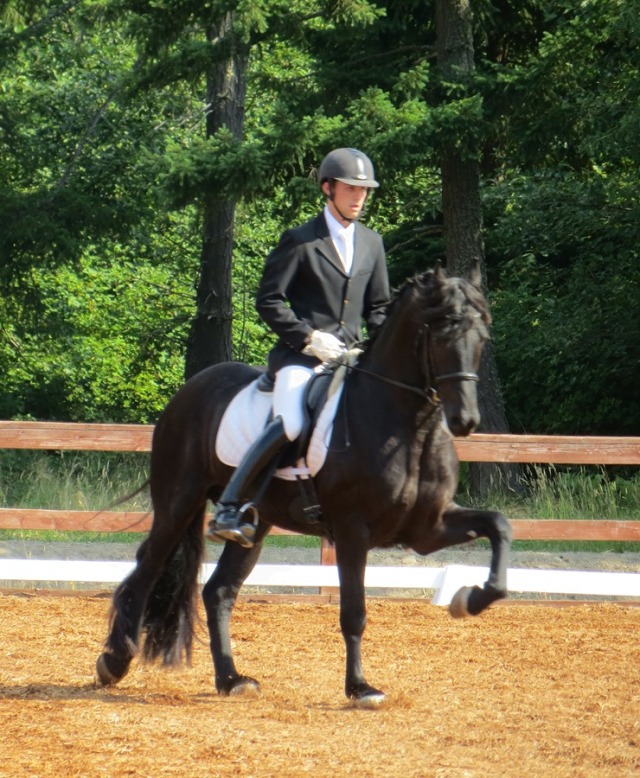 The rider didn’t intend for his little stallion to show off, to be so extravagant with his gaits. Hollywood just WAS. For fun.

If you were lucky enough to see the freestyle dressage at the 2010 World Equestrian Games, you saw what is quite possibly the most dramatic ride ever. Not, not Moorlands Totilas’ ride. He came in first.

Spain’s Fuego XII, a grey PRE (Andalusian) ridden by Juan Manuel Munoz Diaz, stole the show. He really did. He trotted into the ring, and stood four square. Without a movement from Diaz OR the horse, I saw the horse turn from a still life to a quivering mountain of restrained energy.  Diaz saluted, the first notes of the Spanish Flamenco music began and Fuego broke into a piaffe and then an extended trot that astonished the crowd.

Think of it..this is Dressage. A horse sport akin to watching paint dry, but not as exciting.

Fuego was fully aware that he was the STAR of the show. I’ve never seen such passion, such utter joy at doing what he loved: high level dressage. What a HAM.

The stadium of over 22,000 people jumped to our feet, CHEERING. Fuego took it all in as jet fuel and just got more and more and MORE flamboyant. He was an equine superstar…absorbing the pleasure of the crowd and working his heart out to give us his all. At one point, Diaz held the reins in one hand-while riding one tempe changes-and encouraging the crowd to clap..which we all did. I was YELLING, but you wouldn’t have known it. So was everyone else. 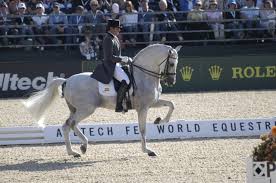 At the end, Diaz halted, doffed his hat to salute-and the spectators roared with one voice, an explosion of adulation that startled the stallion. Diaz rode it out, laying on his back and waving his hat. 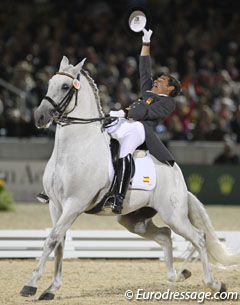 Now again, this is dressage. Staid, conservative, sober and solemn people, sitting quietly and respectful no matter how good or bad the test,  whispered discussions of was he above or below the bit and never, ever raising one’s voice.

We cheered for  five minutes, while the judges scored Fuego and Diaz. Their score flashed on the board.

But we did, and we weren’t all Americans. The crowd was mostly Other Nations. It didn’t matter if your horse/rider wasn’t from Spain. We’d seen a passionate horse doing what he loved,with the flair, the machismo, the brio, that only a stallion, only a hotblooded PRE could do.

Oh, yes, we loved Fuego and were telling the international judges (all of whom, it seems had their anal pens set on “High”.) that we LOUDLY disagreed with their score.  We boo-ed. The judges were astonished, and, may I say, perhaps a little frightened? It’s one thing to mark a horse down for something that we, the crowd, didn’t see…but then to have over 20,000 people ready to come down and DISCUSS it with them is something entirely beyond their comprehension. Nothing in the FEI regulations tells them how to handle a bunch of wrought up dressage fans.  If we’d have had pitchforks, they probably would have bolted.

The score stood. But everyone thought, you know, maybe Fuego wasn’t (fill in the blank-coming up through the bridle, maybe he did bobble that change)…but what he lacked in the execution of dressage way beyond 4th Level, (and you don’t get to the World Equestrian Games on just good looks and a lot of money) he more than made up in passion, and willingness, and let’s be honest..joy.

That is what makes a stallion more than just a male horse. That certain self awareness, that self possession…the majesty. Yes, the majesty.

To add even more information: I stayed in the same hotel that the Spanish, Italian, Swedish, and Brazilian teams stayed in. It was truly a United Nations. I met people from all over the world. I helped a Swedish rider who spoke no English, and I speak no Swedish, but we both had a smattering of German, and communicated that way.

One night, quite late (but then, all the European teams didn’t even think of dinner until 9 PM, when Americans are already in bed), the hotel lobby was full of people coming in from the Games. I was there with several of the women I’d teamed up with to go. The Swedes were milling about in the lobby, either having just returned from somewhere, or waiting to go out on the town (which, in Lexington, Kentucky, isn’t much,)

The main lobby doors opened with a swoosh, and Juan Manuel Munoz Diaz walked in. He stopped (perhaps unconsciously, but underneath a bright, pinpoint light) at the sight of one of the Swedish women.  He doffed his cap and tucked it beneath his left arm. He came to attention,clicked his heels, and nodded his head in a brief salute.

Then he took her hand and kissed the back of it.

Every woman in that lobby felt that electrifying kiss. Oh my god.  Even  me, so crazy in love with my husband that I’d sooner die than cheat on him, felt that lightning bolt in my loins. As passionate and emotional as his stallion, Sr. Diaz  was the image of gentility, of reined in machismo, of old world chivalry. And, dare I say, high sexuality.

Awestruck, one of my friends said, “You know what, that man won’t sleep alone the entire time he’s here in the US.”